Thanks to all that attended to pay their respects at Mill Dam on November 11th. Thanks to Jim Pyrah for playing the Last Post and Reveille, and to Denzil, Kirsteen and Roddy for their participation. 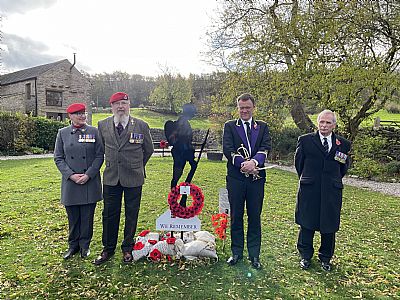 The Patient Participation Group for the Central Dales Practice

Synopsis of the meeting held on April 25th 2022

The Practice is trying to raise funding for the three new doors that are needed. There are 2 at Aysgarth and 1 at Hawes which will each cost some £3K.

Concern was raised about the delay in some medication which some patients found hard to understand. When medication does not arrive it is immediately re-ordered. Patients can order their prescriptions two weeks in advance of needing a repeat supply. The same medication in different packaging was causing some patients concern.

Lynn Iveson, who is an Advanced Care Practitioner and a physiotherapist, has been appointed to draw up care plans for all residents at both Sycamore Hall and Kirkwood in Leyburn. She will be taking over Fiona’s rounds at Sycamore Hall. Kirkwood residents have to be patients of the Leyburn Practice.

Covid Boosters for over 75’s - Patients have to phone 119 to check where it is possible to get a booster vaccination. The nearest place is the Hawes Pharmacy Tel: 01969 667213. Other options include Northallerton, Darlington. Kendal and Kirby Stephen. Housebound patients will be given theirs by the Practice.

Practice staff – Dr Scott will be returning to Ireland at the end of September. Dr Pain attends the Friday evening surgery in Hawes. A new receptionist at the Hawes surgery will arrive at the end of May, and a Secretary to help with the GPs’ workload will arrive in July. The workload had led to an increase of 53 hours a week in extra support staff. On average our GPs undertake 60 appointments each day.

Open access is not at all likely to ever restart. Patients who need an emergency appointment must be available to receive a return phone call from a GP. The GPs will try 3 times, but this is a most inefficient use of their time. When a patient goes to A&E they have to tell the receptionist what the problem is. It is important that the really urgent patients are contacted first. The number of patients who do not turn up when given appointments is increasing which again is very wasteful of time as well as impolite.

Any patient can request that their prescriptions be delivered. However, it is expected that they will be at home when it arrives.

The Richmondshire Primary Care Network does not currently have a physiotherapist. South Tees Hospitals NHS Trust are trying to recruit one. Options are to go privately, or to ask for a GP referral to the Muscular Skeletal (MSK) Physio Direct service at the Friarage. There is currently a waiting list to be seen. There is also a waiting list of several months for a hip operation.

Over 500 community groups across the UK are supporting the national ‘20’s Plenty’ road safety campaign, which is aimed at having a 20mph speed limit in residential streets, towns and villages.

Following a consultation with residents, the Parish Council has voted to support the campaign.

Leaflets were distributed to residential properties in West Witton and Swinithwaite in January and February 2022 advising residents of the ‘20s Plenty’ campaign. The leaflet explained that there was no guarantee that the campaign would succeed but residents’ views would be appreciated to help the Parish Council decide on whether to add our support to what is now at the time of writing over 100 other PCs across North Yorkshire. The leaflet was also displayed in the village shop and on the PC website.

18 responses were received via email. Of those, 4 were not in favour of the campaign, felt it was unnecessary or were unconvinced of its chances of success, with the rest agreeing that in principle the campaign would be beneficial.

At the PC meeting on March 22nd 2022 councillors discussed the responses and voted to support the campaign.

A full ist of responses received is available here